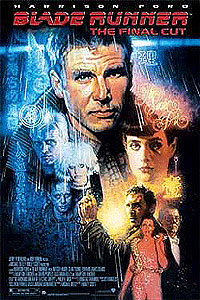 In the year 2019, ex-detective Rick Deckard is called out of retirement to track down and eliminate a team of humanoid androids that have escaped from an outer space mining colony and have taken refuge here on Earth. During his search for the fugitives, he discovers some disturbing secrets about the future plans of the androids' manufacturer, the Tyrell Corporation.

R for for violence and brief nudity